From high above, springtime in Svalbard appears as a solid sheet of snow and ice– hardly an inviting place to build your nest and breed.  But when 24-hour sunlight returns to the Arctic, birds don’t wait.  During my last two days in Longyearbyen, the odd silence of daylight at midnight has suddenly transitioned into a continuous cacophony of thousands of trilling, complaining, rejoicing seabirds, teeming high above on narrow cliff ledges.

As quickly as daylight has returned, lengthening by 40 minutes each day until the sun no longer set, the birds have returned to reclaim their timeless birthright.  Despite appearances, climate change has dramatically reduced the annual coverage of sea ice, diminishing specific zooplankton that certain birds, such as the little auk, depend upon for successful breeding.  Could this glorious annual rite of spring be at risk? 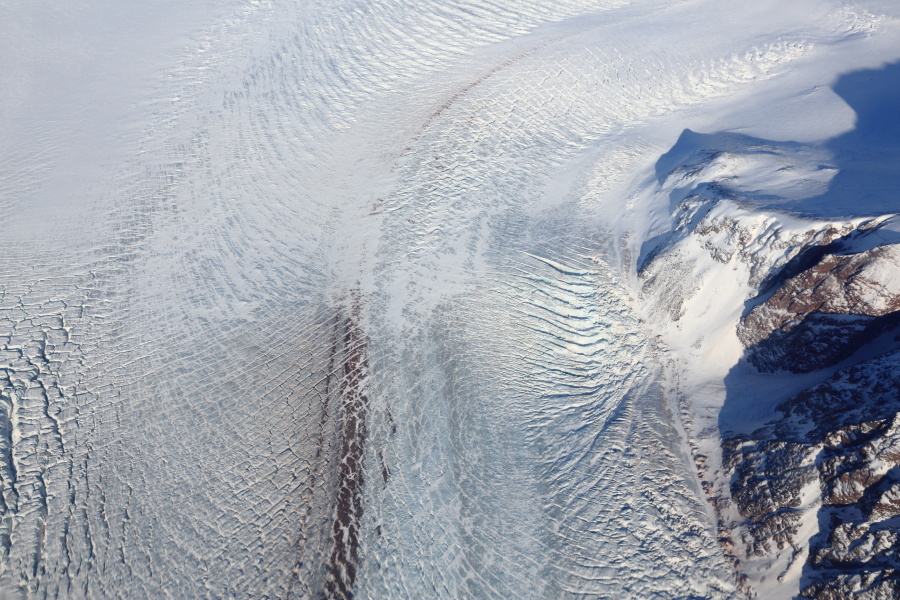 Aerial view over Pretender mountain at junction of Kronebreen and Infantfonna glaciers in April near Ny-Ålesund in Svalbard, Norway. © Randall Hyman

The biggest predator of reindeer is climate and starvation, not polar bears.  As the climate wavers in the Arctic, alternate periods of  rain and freeze encase tundra forage in an impenetrable layer of ice.  Terrestrial ecologists Åshild Pedersen from the Norwegian Polar Institute and Brage Hansen of the Norwegian University of Science and Technology conduct regular census programs related to climate change.

In a recent study, glaciologist Jack Kohler worked with Hansen and Pedersen to identify icing events over the years and correlate them with reindeer population fluctuations.  To a large extent, arctic foxes depend on the reindeer’s bad luck for their own survival, feasting on cadavers.  In a good reindeer year like this one with little icing, foxes may suffer, but even in the best of times the Arctic wind and cold is unforgiving for all species, including the Svalbard reindeer, a unique, stockier subspecies of its mainland cousins.  Click photo below to see what it’s like out there. 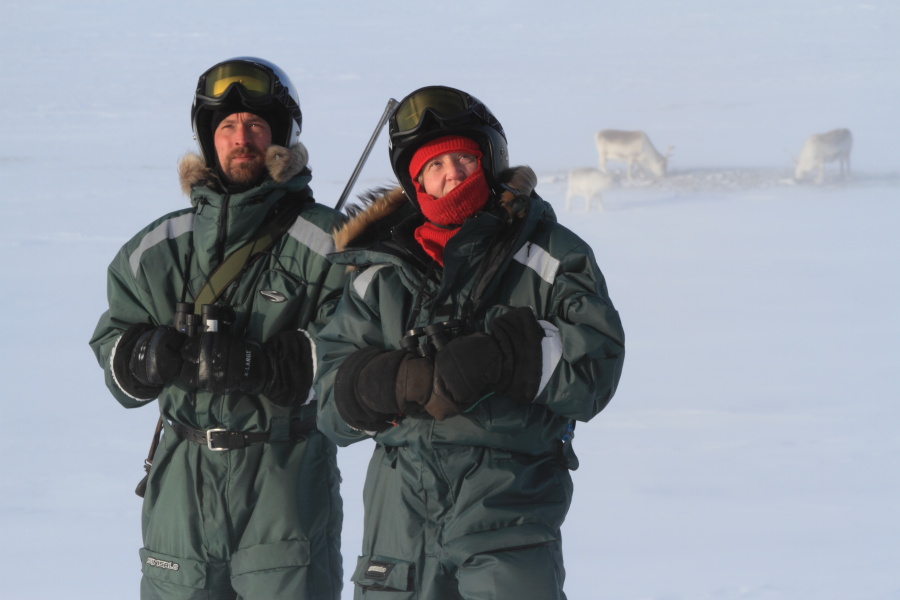 Ice physicist Sebastian Gerland and marine chemist Agneta Fransson of the Norwegian Polar Institute work with marine chemist Melissa Chierici of the Institute of Marine Research atop fjord ice below an outlet glacier.  They core the ice to measure ice thickness and analyze the carbon cycle below and within the ice.

Gerland is interested in how ice thickness and snow cover affect the absorption or loss of solar radiation.   Fransson and Chierici look at microscopic aspects of the carbon cycle  to understand ocean acidification and atmospheric warming due to carbon dioxide.  Meanwhile, marine ecologists monitor changes in the population of micorganisms living in tiny tubules and fissures in the ice as well as algae that thrives year round on the bottom of the ice itself.

One opposite paradox: when ice freezes, salts such as calcium carbonate are squeezed to the surface as ice “flowers,” reacting with the air to create more carbon dioxide.  Could this also contribute to atmospheric warming when the system is off balance?  Scientists get dizzy and excited constructing models that connect all the tiny aspects with the big ones.  Journalists get dizzy trying to understand them! 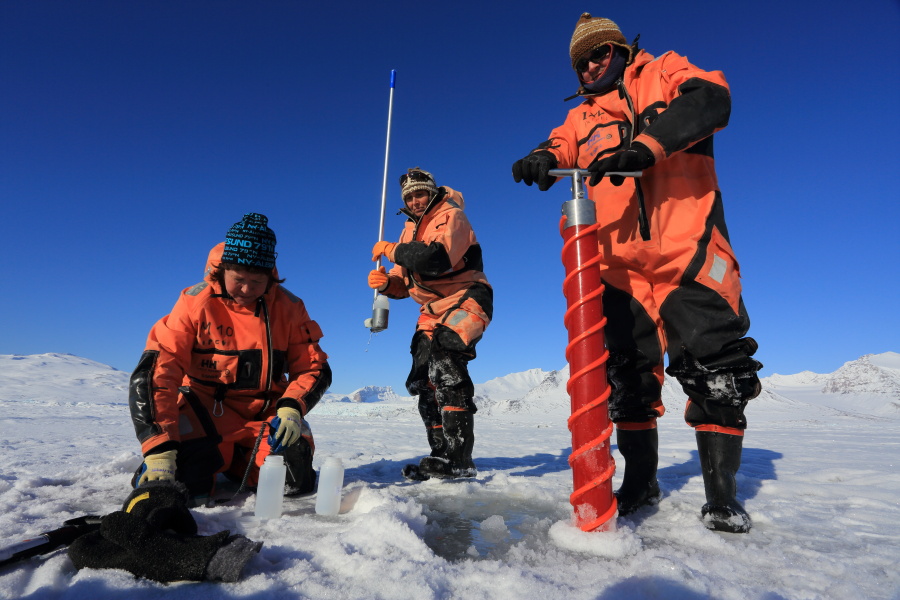 Svalbard glaciers run the gamut, from those that surge forward into the sea once a century to those that are receding. Kohler focuses on the ebb and flow of ice among four glaciers.  Trends show a net loss of mass as the local climate rapidly changes. It’s cold work at an elevation of 750 meters (2460 feet) atop a glacier with a stiff wind at -14° Celsius (7° degrees Fahrenheit) and nowhere to hide.

Fortunately, glaciologists often dig pits to core the snow and stay nice and toasty.  Unfortunately, foolish photographers often stand above those pits taking pictures of the glaciologists for hours. Brrrr! Pay off? The photog gets the honor of filling in the pit and work up a sweat afterwards. Welcome, hot work! 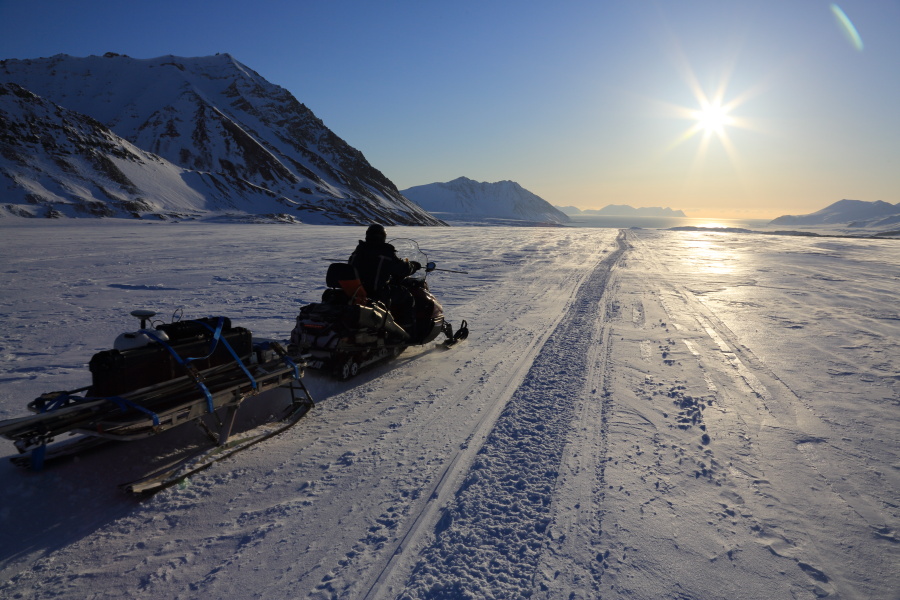 When it comes to the complexities of climate research, it DOES take a village.  By a coincidence of history and location, the former coal mining town of Ny-Ålesund provides a remote international science base for the interaction of different sciences and researchers plumbing the dynamics of climate change.

Glaciologists methodically study ice atop mountains as well as at sea, marine chemists examine carbon uptake and release in the oceans, marine biologists assay plankton, and zoologists census mammal populations such as reindeer, now suffering from starvation amid increased melt-freeze cycles that encase tundra in impenetrable layers of ice.

It does “take a village” to explore the rapidly changing Arctic ecosystem and climate, and nowhere does this apply more than here, 780 miles from the North Pole above the 78th parallel on Spitsbergen Island. 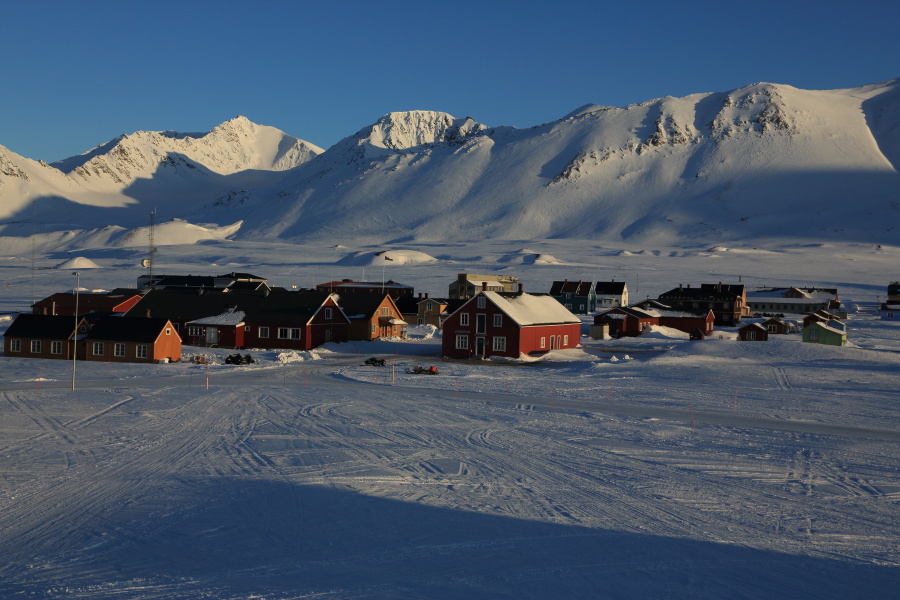 German and French climatologists of the combined AWIPEV Institutes at the Ny-Ålesund science base probe the atmosphere with all the tools at their disposal, from weather balloons soaring 30 kilometers high, to airplanes flying a few thousand meters up, to a giant orange blimp lovingly called “Miss Piggy,” who humbly hovers 800 meters above the weather station with six “tails” tied to her tether in 100-meter increments measuring wind and temperature. 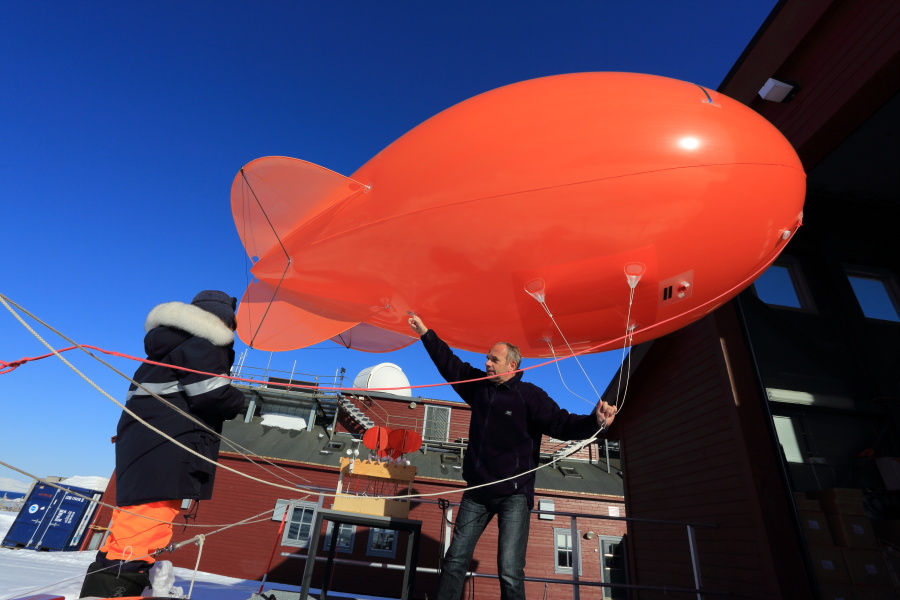 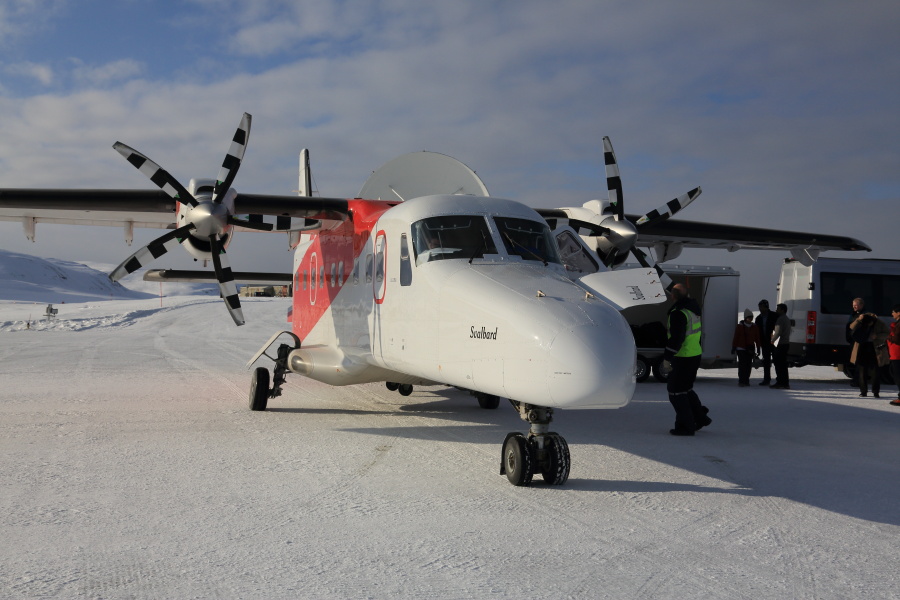 This is the start of my four-month project as a Fulbright Scholar in the Norwegian Arctic exploring science, technology, culture and tourism in the context of climate change and shifting paradigms in the Arctic Ocean. After passing through Oslo and Tromsø and traveling non-stop to Svalbard, the first day of this huge project is spent in the village of Longyearbyen on Spitsbergen island, where I wait one day on the way to the science base at Ny-Ålesund.  Snowmobiles and skis rule here.  Still lots of ice along southwest Spitsbergen, but relatively ice free around Longyearbyen.  Temps in low teens (for you Americans), minus 10 Celsius for the rest of world!  Flying onward to Ny-Ålesund tomorrow above the 78th parallel, just 780 miles from the North Pole.