Everyone wants to see a polar bear when they come to the Arctic. It’s only natural, and great bragging rights. They are magnificent creatures, an ursine version of the Terminator, practically unstoppable, even with bullets, and they find humans just as tasty as a seal meal.

While it’s thrilling seeing one, polar bears are a mixed blessing if you’re studying ground-nesting birds. “I’m Homeland Security, and home is Storholmen Island,” says Børge Moe, research biologist from the Norwegian Institute for Nature Research (NINA). He and evolutionary biologist Sveinn Are Hanssen, also of NINA (see related posting, Tromsø: City life, ducks and geopolitics), have been coming to Svalbard for years studying eiders and skuas, but recent trends have made them as much polar bear specialists as bird scientists.

“There didn’t used to be many bears in the area, but now we have to really watch out,” says Moe. “Today was great. We got to see one on a nearby island and then do our work on Storholmen. That gave us thirty minutes for sure before he could swim the two kilometers to get to us.” (To view a video about their work, see VIDEO REPRISE: Seeking the Arctic skua)

Working with them for four hours on the island, I find his calculation slim consolation, but Arctic scientists count risks differently than New York bankers. Swapping binoculars and a single rifle, Hansen, Moe and Masters student Elise Skottene keep a watchful eye for the bear while checking nests, counting eggs and snaring birds the length of Storholmen.

In the end, it is a great day, with photos of a bearded seal on ice, an Arctic skua perched on a small berg, a polar bear peering over a ridge, and lots of birds snared, fitted with electronic loggers and sampled for toxins in their blood. On the down side, eiders have abandoned all nests on the tip of Storholmen where the team saw the bear swim ashore two days earlier.

“We’ve been talking with our colleagues who work elsewhere on Spitsbergen and we’ve all seen dramatic increases in polar bear predation on eggs and chicks over the past 20 years,” says Moe.

With less ice, more summer bears get left behind on Svalbard hunting for food on land instead of seals at sea. The data Moe has compiled on the topic is stunning and compelling, but more about that in an upcoming article.

CLICK PHOTO TO JOIN THE TEAM (viewer bears all risks): 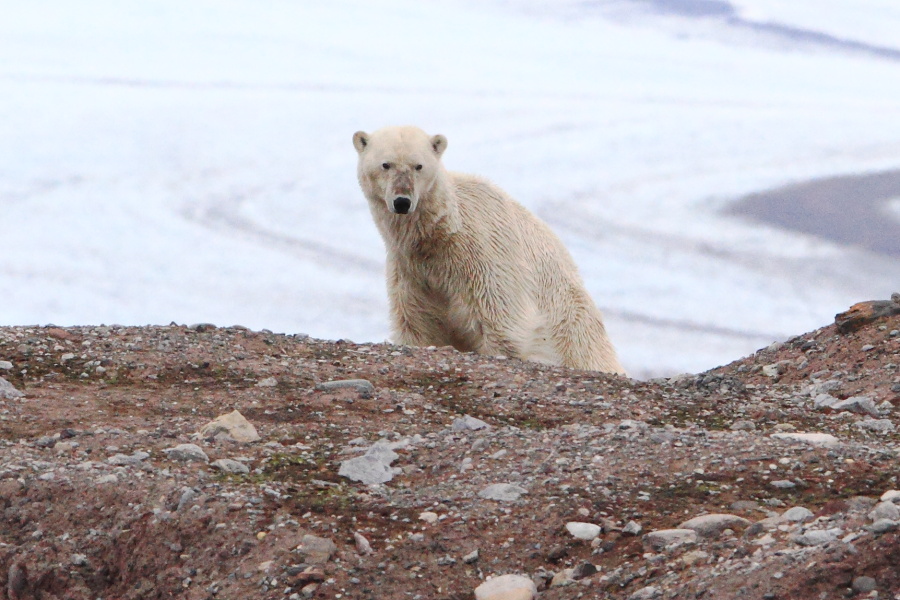