The Dutch research station at Ny-Ålesund is no fly-by-night operation, especially when it comes to Arctic terns, who literally fly to the ends of the Earth to avoid darkness.  As world record holders for long-distance migration, these terns bask in endless daylight in Antarctica, November through February, and return north when the sun dawns in the Arctic bringing summer-long continuous daytime. Like scientists on an avian treasure hunt, the Netherlands team searches the village for nesting terns, scooping them gently from their nests and retrieving ultra-light geolocator loggers from their legs to fit them with new ones. (see later post, VIDEO REPRISE: Return of the terns)

Wearing knit caps to protect themselves from the stilleto-sharp beaks and screaming dives of indignant terns, Arctic ecologist Maarten Loonen and Masters student Tim van Oosten work together capturing and tagging birds.  Loonen explains, “Our loggers show that the Svalbard population flies over 20,000 kilometers (12,500 miles) on a zig-zag route from the Weddell Sea on the Antarctic Peninsula, stopping first in West Africa, then Central America, then Greenland and finally back here. In total they fly as much as 80,000 kilometers (50,000 miles) per year. This was a surprise.”

Many terns have already bred now and fledged their young, but those who suffered egg predation from foxes or polar bears are still nesting and can actually lay up to three times a season if their eggs are taken. They depend on the fat capelin and Arctic cod in the waters surrounding Svalbard to breed and stay healthy. Despite steadily rising ocean temperatures, these fish have so far remained abundant.

“They are income breeders and come here to both feed and lay,” adds Loonen.  “Our other study species, barnacle geese (see later post Mother Goose as scientist), are capital breeders who converge in Scotland in huge flocks in spring to fatten up on grass before flying here to raise their young.”

Van Oosten’s work helps Loonen compare the health of Netherlands-nesting terns with the Svalbard population, which just begins nesting in the Arctic when Dutch terns are ready to fly south. The timing of upwelling ocean currents that produce good fishing along the migration route may be critical.

“The number of terns nesting here this year is one third of previous years,” says Loonen.  “I’ve noticed their tail feathers are worn and dirty, which could mean they had some trouble feeding during migration and arrived here in poor condition.”

Meanwhile, some terns have already begun gathering on islands surrounding Ny-Ålesund to prepare for their long flight back to Antarctica in August.  Loonen and Van Oosten wish them many happy re-terns. 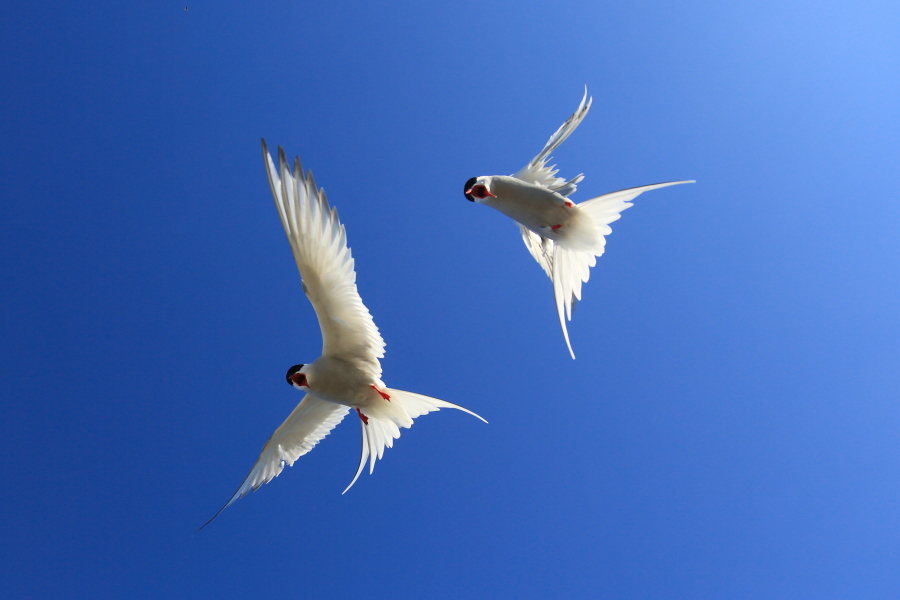