“Oh look,” exclaims a visitor standing on the main road into the Ny-Ålesund science village on Spitsbergen Island, “they think she’s their mother!” The scene she beholds is admittedly endearing, but it’s all about science. Ten downy goslings, stubby winglets stretched outward for balance, waddle frantically behind Masters student Margje de Jong as she heads back to the Dutch science station calling, “Kom, kom, kom!”

Borrowing a page from early field experiments of renowned ethologist Konrad Lorenz, de Jong raised her flock of barnacle geese as hatchlings and imprinted them on herself as head of the brood. Being Mother Goose has its perks, but tending a flock of disobedient goslings isn’t necessarily all it’s cracked up to be. It is a 24/7 commitment no matter the rain, wind and cold, day in, day out. (Also see VIDEO REPRISE: Mother Goose)

“They have a mind of their own,” she laughs, “and don’t always want to follow.”  Sitting in a sunny field of spongy moss the next day, she shows a grudging affection for her fuzzy charges, despite the scientist in her, calling each one by its colored leg bands, read left to right. “Green-green is the independent one, always wandering off and then coming back to make trouble. Green-red was looking sick for a few days but now he’s bounced back. Yellow-white is one of the the really big ones.”

As they tumble over her legs and nestle in her lap, she smiles and tickles one of them, but hers is a serious mission, simulating wild conditions as best she can with semi-captive animals.  Stopwatch and notebook in hand, de Jong meticulously records the feeding habits of each gosling. Having set up a series of cages in the field that prevent wild geese from foraging her plots, she is able to feed her own brood in two consecutive groups, the first enjoying choice pasture, the second getting lower quality.

She hopes to simulate conditions in the Netherlands, where geese are overgrazing, and see what happens in the Arctic. Will second-class goslings here exhibit decreased growth and increased disease? What will this mean for the Svalbard-Scotland population (see previous post Return of the Terns),  which has exploded from 243 birds in 1943 to over 33,000 today?

Ny-Ålesund fields that were once lush with summertime grasses and provided precious habitat for phalaropes and other waders are now bare. Should winter hunting in Scotland be reinstated, or should humans bow out of the equation?  Policy makers depend on scientists like de Jong to make sure no one leads them on a wild goose chase. 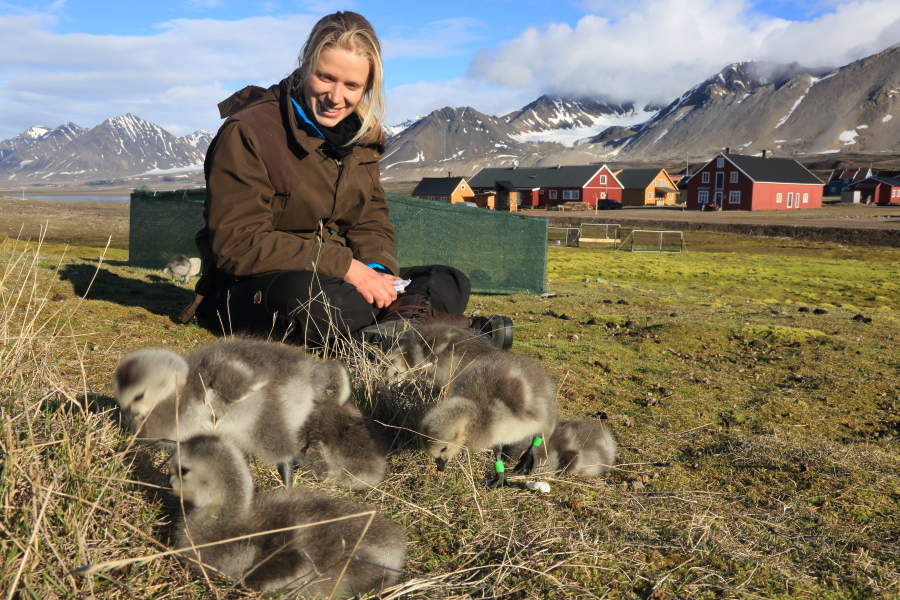