It is soldagen, or Sun Day, here in Tromsø, Norway, far above the Arctic Circle. Last time folks here saw the sun was mid November, and there is great anticipation on this clear frigid day in the third week of January, especially among the children. My day begins at 9:00 a.m. (still very dark in mid morn), attending a speech by the Norwegian prime minister on Arctic foreign and domestic policy in the wake of climate change. While she is from Norway’s right-wing party, there is no debate in Scandinavia about whether climate change exists, just debate about how to deal with the problems and opportunities, as avidly discussed this week at the Arctic Frontiers international conference. After another speech from Greenland’s first female prime minister about her determination to put traditional indigenous lifestyles above exploitation of the country’s lucrative mineral and petroleum resources, I slip out of the dark auditorium to catch a city bus for the coast.

When I was last here in July, kids were swimming in skimpy suits in the cold waters, but today the rocky shore is covered with snow and sheets of ice. Only three girls with a sack of cordwood get off the bus with me. The shore is empty, save for a couple of photographers shivering in the 15F° weather. Distant snowy mountain peaks are already glowing in the rosy first light of sunrise at 11am, but here the southern tip of Tromsø Island is still in shadow. The three girls begin building a fire, and soon more groups arrive, lighting fires along the shore. Suddenly a woman runs forward excitedly pointing and shouting. I swing around and, lo and behold, at 11:04 a.m. the sun has returned from her winter slumber.

Even I, having only spent a few days here, am giddy with excitement. It is the sun, in all her glory, beaming across the ocean from behind a mountain, dancing across the calm waters on this frigid winter day. I run along the shore photographing people’s reactions, and then it is over at 11:11am just as I catch a group of kids sitting on ice-covered beach rocks around a fire with the sun setting behind them. 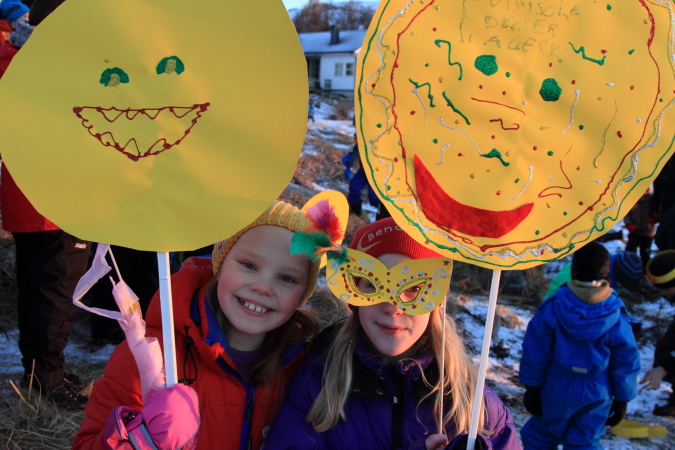 I ask someone where all the school groups are that traditionally come each year to celebrate along the shore. A woman tells me they are on their way and will still see the sun rise. Impossible! It has already set! I suddenly hear the distant commotion of hundreds of boots shuffling down a snowy path carrying hordes of chattering children. Here they are, crowds of them, with suns painted on their faces and decorated paper headbands.

As the kids gather above the beach, the sun magically reappears from behind the distant mountains, as promised, playing peek-a-boo between peaks, tracing a low path along the horizon. Kids are darting wildly everywhere, waving, pointing and jumping with glee. Before it is all over, an hour has passed and the sun has set and risen three more times. I finally join the crowds of happy children and teachers marching from the beach up icy streets back to school.

For me, the celebration is still missing one thing. A girl walking her huge, fluffy white Samoyed dog (never did a dog look better suited for such an icy climate) suggests I duck into the Tromsø Museum to warm up and get some hot chocolate. I discover they have no cafe, but the receptionist escorts me into the staff cafeteria where a party is underway with workers happily drinking hot chocolate and munching on the traditional solbolle, or sun buns— sweet dough, fried like donuts and sprinkled with sugar, some with cream or raspberry filling. My hands are thawing, my spirits are high and my celebration is complete.  The sun has returned home to the Arctic, and so have I. 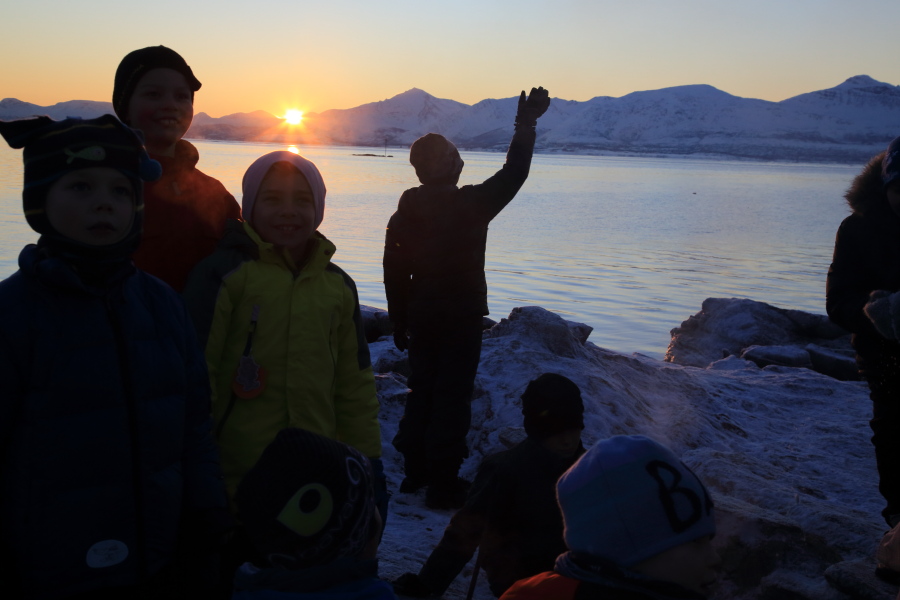