“This is where a huge boulder wiped out a big part of our trail a few days ago,” says Dagfinn Breivik Skomsø as I puff behind him, climbing hundreds of meters up a sixty degree slope to his study site. A long, ugly scar of naked brown earth cuts the trail in two, littered with freshly-broken, angular chunks of broken boulder. “It must have happened sometime during the night, but it fell right near where we work, so it’s a good thing we weren’t here then.” (See later post: VIDEO REPRISE: Seabird diaries)

It’s already late evening, but with 24-hour sun lighting the Arctic island of Spitsbergen throughout summer, night and day make little difference. We won’t return to the Ny-Ålesund science village until sometime toward midnight. Skomsø’s fellow Masters students, Solveig Nilsen and Martin Kristiansen, are already wedging a tall aluminum extension ladder along a skirt of earth beneath a sheer cliff where kittiwakes wheel to and from nests jammed along narrow rock ledges.

Nilsen climbs the ladder with no hesitation, toting a pole with a mirror on the end and stretching it along the ledge to count chicks and eggs in nests she can’t quite see into. Kittiwakes swoop past her head and scream wild protests. She gets the job done quickly and scampers back down, looking like she took a few direct hits from the birds in a paintball fight. When I ask to climb the ladder for some photography, she has one piece of advice: “If you look up, don’t open your mouth!”

Each of the trio of Masters students has a different dissertation attached to this kittiwake colony. Skomsø and Kristiansen take blood samples to monitor hormones and toxins while Nilsen measures body temperature of specific birds using a thermocouple inserted in the cloac to establish a database for calibrating stress associated with capture and handling. Veteran biologists have spent decades tracking the effects of climate change and ocean toxins on various Arctic species, but this trio and their peers will soon inherit the problems of a warming planet. Like this study site, the way forward promises to be a rocky uphill struggle fraught with dangers. 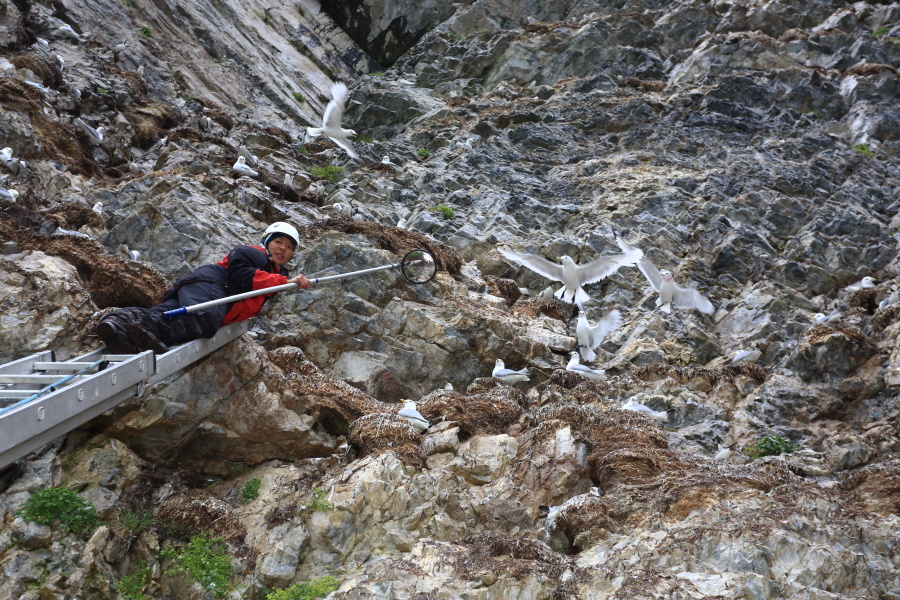