“What you are looking at,” laments marine biologist Haakon Hop of the Norwegian Polar Institute, “is the melting of the Arctic Ocean.”

We are nearing 82 degrees North latitude aboard the research ship R/V Lance, just 800 kilometers (500 miles) shy of the North Pole, in search of continuous ice.

Circumpolar ice approaches its annual minimum in August-September, but we have traveled far north of the Svalbard archipelago into waters nearly 4000 meters (2.5 miles) deep and still not encountered the ice that once extended much farther south, even in summer. Since records first began in 1979, satellite imagery has tracked a 50% decline in the circumpolar minimum, but this year the meltdown halted after rapid retreat in midsummer, actually expanding 20,000 square kilometers in late July.

Increasing ice is unprecedented for this time of year, but such data is deceiving. While storms in the second half of July brought counterclockwise winds and cooler conditions that spread the ice out, age and thickness are far more important than actual coverage, which may be thinly stretched out or thickly concentrated. Most of what we see around our ship is thin, first-year ice, not the 10-year-old, meters-thick variety that used to dominate the Arctic Ocean and ensure good coverage year in and year out. (Later satellite imagery eventually placed 2013 as the sixth lowest sea ice extent on record.)

Does this matter if you’re not a polar bear dependent on a frozen platform for hunting seals? Only if you need air to breathe. On the underside of the Arctic Ocean’s frozen lid grows ice algae, blooming like a rainforest each year when intense, 24-hour sunlight returns in April. Zooplankton and the entire Arctic Ocean food chain depend on this phenomenon, as do humans. This algae and all of the phytoplankton in the Arctic Ocean sequester vast quantities of carbon dioxide, a climate-warming gas, and produce abundant oxygen.

For 10 days, our retinue of 17 scientists and scuba divers has been sampling and analyzing ocean temperatures, salinity, chemistry and plankton at varying depths to track shifts in marine ecosystems. Starting with Kongsfjord near the Ny-Ålesund research village and sampling at specific GPS points in the Fram Strait toward Greenland, we concluded with a similiar set of measurements in north-facing Rijpfjord, 270 kilometers (about 175 miles) to the northeast at the northernmost tip of the Svalbard archipelago. The two fjords are normally affected by dramatically different ocean current systems. While Kongsfjord faces westward and receives warmer Atlantic waters, Rijpfjord points directly toward the North Pole and has a deep-water sill that impedes the last, weak push of the Gulf Stream. Despite this, our measurements this year show that Atlantic waters have invaded farther north than ever.

Meanwhile, we continue north in search of ice, an increasingly elusive prey, with some scientists predicting that the North Pole will be ice-free by 2030. (See earlier post, Climate change: Going bananas in Greenland) 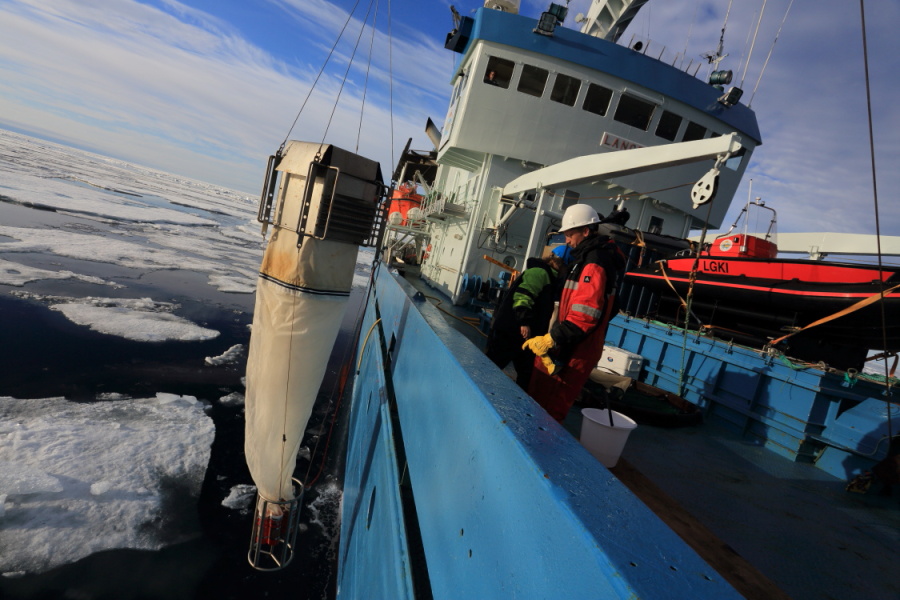